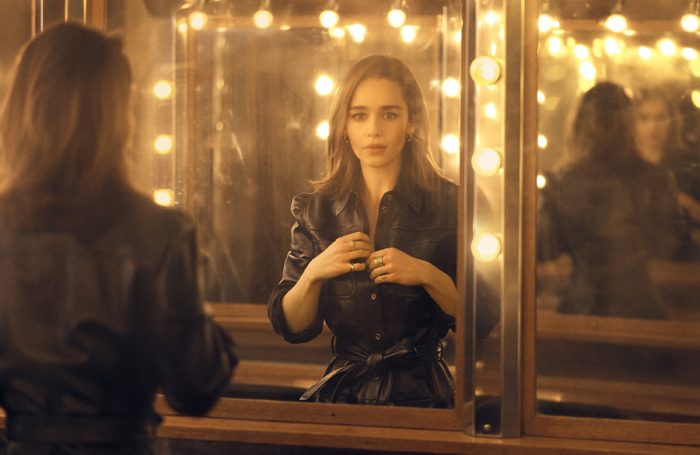 Here are a just a few of the plays The Man in the Grand Circle has his eye on this year. My list of musicals to come soon!

Among the star names coming to the London stage are Game of Thrones’ Emilia Clarke (see above photo) in Anya Reiss’s adaptation of Chekhov’s The Seagull for the Jamie Lloyd Company at the Playhouse Theatre in March.  Timothee Chalamet and Eileen Atkins appear in 4000 Miles at the Old Vic the following month, while back at the Playhouse Theatre in June is one of my favourite actresses (I’ve been lucky enough to interview her twice), Jessica Chastain, in Ibsen’s A Doll’s House.

If you can’t wait that long for your Ibsen fix, then check out Stef Smith’s Nora: A Doll’s House – a “radical” retelling of the story at the Young Vic in February.

Those who like their thrillers with a supernatural edge might want to check out The House on Cold Hill, starring Debbie McGee, at The Mill at Sonning in April.

On the National Theatre’s programme I like the look of Lucy Kirkwood’s The Welkin, starring Maxine Peake and Ria Zmitrowicz (opening this month). In April, Thea Sharrock directs  Jack Absolute Flies Again, a new play by Richard Bean and Oliver Chris based on Richard Brinsley Sheridan’s The Rivals. And in August Josh O’Connor and Jessie Buckley are the star-crossed lovers in Romeo and Juliet.

Talking of unmissable Shakespeare, Cush Jumbo takes on Hamlet at the Young Vic in July.

Further afield, my theatrical sweet tooth is tempted by Quality Street, Northern Broadsides’ revival of JM Barrie’s farce by  which opens in February in Halifax’s Viaduct Theatre and then tours. Barrie’s play was so popular at the time that it gave the chocolates their name.

And there I was trying to give up chocolate this month…

If you missed Laura Wade’s The Watsons at the Menier Chocolate Factory in 2019, be sure to catch it at the Harold Pinter Theatre where it opens in May. This genius trip into the Jane Austen universe owes a lot to Pirandello, as does the title of this play at the Southwark Playhouse in April: Five Characters in Search of a Good Night’s Sleep.

Finally, to the Royal Court for a play (in June) which has quite possibly best title of the year: Purple Snowflakes and Titty Wanks.